Adapted and directed by Harry Love 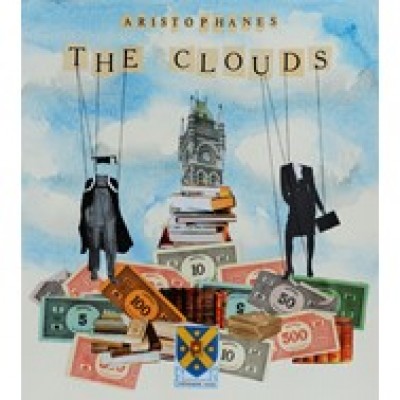 For a comic poet Aristophanes was a serious man and he wrote serious plays. As one scholar has noted, “the Clouds is in fact, if not in name, a tragedy.” So be careful what you laugh at. When he first presented his play in 423 BC the audience was not impressed. He therefore revised it by putting in a speech reminding them how stupid they were not to get the point the first time.

The play has been further revised for this production, first by putting it into English for the convenience of a new audience, second by slimming it down  bit, third by picking up the plot and slipping it, like a well-worn academic gown, on to the academy of the 21st century. This last was really quite easy, given the fact that those little human weaknesses like greed, vanity and the love of power are as characteristic of our modern, corporatised institutions as they were of those from the deep and distant past.

Why a tragedy? Unlike the officially tragic poets, Aristophanes doesn’t pour buckets of blood all over his actors, but there is a certain level of violence. It’s intellectual and moral violence and it all rebounds on the shifty old twister who wants to use education for all the wrong reasons. And the institution that substitutes management for education is only too happy to oblige.

This production has been generously supported by: